Alex Craft annoyed the crap out of me.

Not the writing, not the author, not the plot, not the setting, not the other characters in “Grave Visions”. It is Alex Craft herself.

I’ve been mulling it over for a couple weeks and I’m not sure if the author is doing it on purpose now that we know Alex is fae (it’s not a spoiler if it’s on the book jacket). She’s not fully human so maybe her priorities and actions don’t match up with human values.

I thought about going into why I think she is being selfish, stupid, annoying and hurtful with each major decision she makes. But, then I realized I was just getting upset with her all over again and I need to let it go.

Great book with a main character that I wouldn’t want as a friend, coworker or even enemy.

Before getting into spoiler territory here is a little 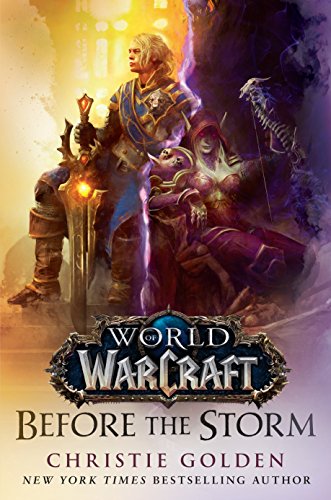 Nice, easy read but don’t bother if you aren’t a huge World of Warcraft fan.

The theme of opposites coming together with horrible or explosive results jumped out at me.

The King devoted to the light is paired up with the Queen who yearns for shadows and quietude. When their forces meet in an attempt to find common ground it ends up with a seemingly inevitable conflict and the deaths of many involved.

An estranged husband and wife from opposing factions are brought back together. After a rough reconciliation they literally end up on top of a bomb.

Life and Death are brought together in the form of the forsaken. People who have died but were brought back to some kind of life in decaying bodies. They are most cut off from their former lives and families and struggle to find a new way to exist.

Since this is a book that is part of a larger universe, the chances that anything significant will happen to the characters was minimal. We know who survives the conflict and who doesn’t.

I finished the book thinking I knew more about the characters and their thought processes than I had before. But that doesn’t mean I agree or even understand them.

The Horde side warchief still remains an enigma to me. She seems like a study in opposites within herself. Ultimately, I was left with little understanding of what her goals or motivations are. She describes her own sense of honor as ‘somewhat fluid’.

On the other side, the Alliance king seemed almost too simple in his motivation to find peace and have everyone reconcile. While he seems to be taking the his role seriously and willing to fight for it, he also seems blind to some of the realities of his world.

In the end, some blanks have been filled in as I start playing the Battle for Azeroth expansion that launched this month. There are still so many blanks and questions left that, while I’m glad I read the book, I may be slightly more confused about some of the story than when I started out.

There was something much more relatable to within the story of “Death and Daisies” than the other cozy mysteries I’ve read.

Now, I don’t need a book to have characters I can personally relate to in order to love the book. But when it does happen, it creates a different kind of mental bond while I’m reading.

Fiona is trying to make her way in a new country while her family is less than thrilled about it. And, just because they all technically speak the same language in her new home, the barriers are real.

The immigration makes up a relatively small part of the book. A large part was the flower shop opening. I appreciated that she was facing some real challenges. I believe that some other writers might have taken a hand-wavy approach to this kind of shop opening and made it seem like starting a business is super easy when you are a basically good person.

The magic garden was a tantalizing place and idea that I wish had played a larger role. While the book is very clear that the garden has magical properties, the perception of the garden seemed to play a larger role than the garden itself.

I was left wanting to see more of the story happening in the garden. But with Fiona opening a new shop it made sense that the story might focus more of the action in town.

Overall, I enjoyed the novel and would read future books in the series. Who actually “did the deed” left very little impression on me compared to the characters themselves and the setting which is fine by me.

I appreciate that NetGalley provided me with a copy of the book to review. I don’t believe this changed my opinion of the novel any more than if I had checked the book out of my local library.